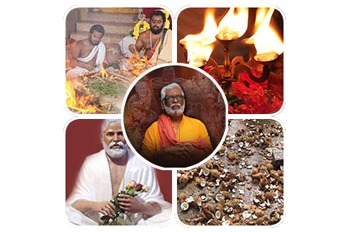 “One main reason why I am here on this earth plane is to teach about karma to people. Karma is reversible. Collectively humanity needs to reverse their karma. The planet needs to go through this change. I am very happy that it is taking place now.: – Dr Pillai

Dr. Pillai has often emphasized the importance of proxy ceremonies to support initiations. He made them mandatory for students of all his premier, year long programs because of their effectiveness. In fact, he once stated that he depends on them more to transform the students than the initiations and techniques he gives. That is how powerful they are.

The Reason They Are So Powerful

The reason they are considered to be so powerful is that they bypass the human ego and work directly with the soul. The human ego is considered to be among the most prominent hindrances of receiving miracles due to its limited ability to conceive, and general negative conditioning. In addition, they are performed at key sacred places where the energy being invoked is believed to be alive and very active.

Thirumoolar is considered to be a preeminent Tamil Siddha from Dr. Pillai’s lineage. Dr. Pillai has taught students one of Thirumoolar’s mantras Arakara which he explains can give you the ability to do the impossible, and also transform the body into light. Shiva and Parvati are considered the Yang and Yin of creation which can bestow upon you ultimate intelligence, consciousness, and power. Targeted to:

Goddess Mookambika was discussed by Dr. Pillai in recent times. He has referred to her as the most powerful form of Kali. Traditionally, this Goddess is worshipped as the Goddess Trinity in one form. Worsh

As per sacred texts, Dattatreya is the Divine Incarnation of the Trinity of Brahma, Vishnu, and Shiva. Invoking him can grant the following blessings:

The offerings will be made to Dr. Pillai’s life-sized statue which he has personally blessed. During his birthday, this ceremony will be performed to invoke the blessings of his avatar Dattatreya Shiva Baba for a new destiny.

Dr. Pillai promotes Heramba Ganesha, the 5-faced Golden Ganesha, as an archetype who can bestow preeminent prosperity. The Siddhas also have revealed he can bestow the Divine Mind. Participating in the Sacred Fire Lab invoking Heramba Ganesha is targeted to:

A fierce manifestation of Shiva, Kala Bhairava, is considered to be a powerful protector and God of time. Kala means time, Mrityu means death, and Samahara means destruction. This Fire Lab is targeted to vanquish the evil forces behind death, decay, and suffering:

Rakakshi Amman is Dr. Pillai’s family Goddess. She gifts the power to manifest. Dr. Pillai calls Karuppasamy a “Performer God” due to his ability to quickly solve problems and fulfill requests. These offerings will be performed at Dr. Pillai’s family temple in Rameshwaram, targeted to:

This grand hydration will be made to Dr. Pillai’s life-sized statue which he has personally blessed.

About Nataraja, the Dancing Shiva, Dr. Pillai has said it is where his consciousness originated from, and where it will return. Nataraja is considered to be the God of Akash, or space, who’s sacred foot is the bestower of grace. He was also the deity whom was worshipped by Swami Ramalingam, the Tamil Siddha who is most know for giving the Arut Perum Jyothi Light Body mantra.

Shiva and Parvati are considered to be the Mother and Father of the world. Their story is one of intense love, devotion, and incredible joy. These rituals will be performed at a special vortex in India, targeted to:

Dr. Pillai has identified Nambunayaki as a millions of years old Goddess who helped make his birth possible. She specializes in healing, not just physical, but also mental, emotional, and spiritual. These rituals will be performed at her vortex at Dr. Pillai’s birthplace to:

Vishnu and Lakshmi are considered to be the masculine and feminine forms of the power of sustenance. These rituals will be performed for them a special vortex in India to:

Dr. Pillai teaches that coconut sacrifice is an esoteric technology that works like Jesus and the cross. The coconut is said to be the ultimate sacrifice as it is a form of Lord Shiva, as discovered by Lord Ganesha. This coconut will be smashed to:

Join these proxy ceremonies targeted to multiply the blessings available only during Dr. Pillai’s Birthday